Sawatdee khrup! ( Thai for “Hello!”). If you’re interested in teaching English in Thailand, we’ve got you covered with this in-depth guide based on hard-earned firsthand experience.

About teaching English in Thailand

When it comes to fun in the sun, Thailand is the undisputed leader in Southeast Asia, if not in the world.

Teaching English in Thailand is all about “sanook” – good, clean fun. Alternatively, if you are so inclined, you can find not-so-clean fun in certain Bangkok and Phuket “sois” (Thai for “alleyway”). But we won’t get into that here.

As the only SE Asian nation never to be colonized, Thailand is truly a unique gem in the region. Expats come for a season to teach and end up staying for decades for a reason. Find out why it’s made our list of the 7 best Asian countries to teach English.

What are the requirements to teach English in Thailand?

The required qualifications for ESL teachers in Thailand are broadly similar to those for other Asian countries. These include:

TEFL Hero’s flagship, comprehensive 120-hour online course is entirely self-directed and online, so you can complete it from the convenience of your bedroom on your own time.

Most schools don’t require previous teaching experience, even if they indicate such a preference in their job ads. The most notable exceptions are international schools, which have significantly stricter hiring standards.

Teaching in Thailand: salary and cost of living

Let’s take a survey of the salary and cost of living in Thailand.

Benefits for teachers in Thailand

The common benefits for teachers in Thailand, which vary by job, might include:

You can often negotiate greater benefits with employers, so make sure you ask.

How much do teachers make in Thailand?

Pay for ESL teachers in Thailand varies widely – perhaps more so than in any other country.

At the bottom rung (what you might expect in public schools in the countryside), native English-speaking teachers can expect a minimum of 30,000 THB/month (equivalent to about $1,000/month).

At the higher end of the spectrum – for instance, at a Tier I international school in Bangkok – teachers potentially rake in as much as 200,000 THB/month (equivalent to $6,000+/month).

Salaries can fall everywhere within that spectrum. It all depends on the type of school, the location, and the teacher’s qualifications.

For a more extensive breakdown on teacher pay in Thailand, check out our deep dive on the salary for teaching in Thailand.

What’s the cost of living in Thailand?

Cost of living hinges largely on where you work and live. The big cities are significantly costlier than more rural areas.

According to Numbeo, the cost of living for a single person in Bangkok in a one-bedroom apartment is roughly $800-$1,000, depending on where in the city you live and work. A similar cost of living is found in Chiang Mai and Phuket.

Keep in mind, though, that many schools include free lodging as part of their employment package, which would greatly reduce your monthly expenses.

If you work outside of a metropolitan center, that cost will drop dramatically.

This is a true story: back in 2011, I lived and taught at a public school in a tiny town called Ranod in Songkhla province. I lived with a local rice farmer, the cousin of my agent, and his family. His wife ran a beauty salon on the first floor of their home.

I had a nice bedroom upstairs, for which I paid $30/month. They also lent me a motorbike to use, for which I paid an additional $30/month. So, even though I was making the bare minimum of 30,000 baht/month (roughly $1,000/month at the time), my cost of living was a fraction of that income.

The lowest cost of living would likely be found in Isaan, the eastern rice-growing region that neighbors Laos and Cambodia. Chances are you won’t make much beyond the absolute minimum for ESL teachers of $1,000/month, but you won’t need anywhere close to that to thrive in this region.

Plus, you’ll get a free VIP pass to Isaan’s stunning temples.

Let’s take a gander at a handful of the most common teaching positions in Thailand.

Next to public schools, private language school jobs are the most bountiful.

There are both private full-time “regular” schools and private language schools that operate primarily in the evening and on the weekends when regular school is out of session.

Some private language schools are independent and some are chains with locations spread throughout the country.  Some cater to learners as young as pre-K while others educate working adult professionals.

Here’s one ad from a chain called Direct English Thailand, which provides ESL instruction to adults, posted via ESLcafe.com:

The chain is offering positions in Bangkok, Samutprakarn, Chonburi, Nakorn Pathom and Ayutthaya. As with many adult-centered private language schools, you’d be teaching primarily business English for career-oriented learners.

If you really want to get out into the hinterland to see more of the “real” (i.e., traditional) Thailand, public schools are the way to go because they’re literally everywhere – even in the impoverished hill tribes region of extreme Northern Thailand.

Generally speaking, as you might expect, due in large part to fewer resources and government bureaucracy, they’re more poorly managed with lower pay than private schools. You won’t make more than 50,000 THB/month ($1,600/month) in most schools, and many pay the basement rate of 30,000 THB/month ($1,000/month).

Many public school job placements are mediated by teaching agencies, which recruit teachers on behalf of schools that may not have any English-speaking staff.

Here’s one such example of an agency that places teachers across Thailand:

As the highest-paying type of ESL institution in Thailand, competition for positions at these schools is stiff and the requirements are usually higher.

International schools are heavily concentrated in the major urban centers Bangkok, Pattaya, Chiang Mai, and Phuket. They typically cater to the economic elite.

Because the entire curricula in international schools are often administered in English, many positions for subjects outside of English are reserved for foreign native English-speaking teachers.

For instance, consider this ad for a history teaching position at Thai Singapore International School:

So, if you have a particular interest or expertise in a subject like history, sociology, music, science, or something else, consider the challenge of teaching one of these subjects in English to a non-native student body.

Last but not least are universities, colleges, and trade schools beyond the high school level. There are both public and private universities in Thailand.

In fact, at the private university in Bangkok where I worked for nearly three years, several of my coworkers did not even have a college diploma, although on paper that’s a universal requirement.

Where to teach English in Thailand

Here are the three biggest ESL destinations in Thailand (which are also the most densely populated urban centers):

How to find an English teaching jobs in Thailand

Here’s how to secure your ideal ESL job in Thailand.

Job boards are the handiest ways to get your resume into the hands of multiple recruiters at scale.

If you can get into the country before you actually find a job, you’ll have a huge advantage. Many employers prefer to hire candidates who are already in-country. Most Western passport holders get 30 days of visa-free admittance automatically.

You can stay in a hostel for as little as $5/night and, if you’re careful with your money, you can eat for the same daily price while you look for a job. I went to Thailand with literally $1,000 to my name and a hope and a prayer, and found employment within a week.

If you don’t have the option of traveling to Thailand to look for a job on the ground, hit the job boards aggressively. The market favors the teacher, so schools respond quickly to applications.

What visa do you need to teach English in Thailand?

To fully comply with the law, you’ll need non-immigrant b visa (“b” is for “business) and an accompanying work permit sponsored by your employer.

That said, there are many, many teachers I’ve met in my time who teach English on tourist visas or permanent residency visas. While technically illegal, with intermittent crackdowns by Thai immigration, teaching on these types of visas can be, and has been, successfully done for decades at a time.

However, just be ready to pay hefty fines and possible deportation/banning if caught. I wouldn’t recommend the risk if you can get a non-B and work permit, which your school or agency should be willing to arrange for you.

What’s it like being an English teacher in Thailand?

Generally speaking, the office environment is more relaxed than in other Asian cultures like Korea, Japan, or China. There’s seemingly a weekly holiday — to commemorate a royal family member’s birthday or a Buddhist religious festival — that forces school closures. Faculty and students are often friendly and relaxed in their relations with “farang” (Thai for “foreigner”).

ESL work life in Thailand isn’t without its pitfalls, and teachers’ experiences vary widely from life-changingly positive to morale-wreckingly awful. For a nuanced, balanced perspective on ESL in Thailand, check out 10-year veteran Mike Davidson’s experience:

To learn more about the unique work life experience in Thailand based on extensive firsthand knowledge, head over to check out my guide, How to Navigate Sticky Cultural Issues While Teaching English in Asia.

Other Asian countries to teach in

See where else you can teach English in Asia.

FAQs About Teaching English in Thailand

Let’s run down some notable frequently asked questions (FAQs) regarding living and teaching in Thailand.

Is teaching English in Thailand hard?

Compared to other destinations, Thailand is generally more relaxed as a culture. Schools are typically less demanding of teachers than they are in neighboring countries.

Do I need a degree to teach English in Thailand?

In most instances, you will need a degree. However, due to various visa arrangements and employer preferences, it’s possible to teach English in Thailand without a degree.

Is teaching English in Thailand worth it?

You won’t make a fortune in Thailand and you won’t bring home tons of cash in savings, unless you really penny-pinch. But as far as experience goes, teaching in Thailand is worth it.

Are English teachers in demand in Thailand? 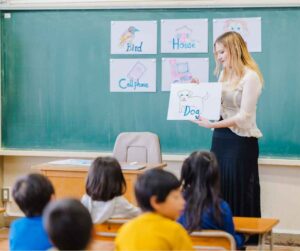